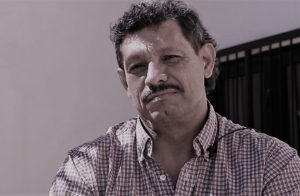 On a fall day in November 2012, protesters filled the streets of Caracas, Venezuela to march in support of human rights and freedom of expression for Venezuelans living under the dictatorship of President Nicolás Maduro. The Venezuelan National Guard, along with other armed government groups, used live ammunition to disperse the crowd. A sniper fired at a protester, killing him. The man fell to the ground only feet away from Dixon Rafael Reyes Gonzalez.

“At that moment I greatly feared I was going to die. I ran desperately looking to refuge,” said Reyes Gonzalez.

Back in his hometown of Maracaibo, Reyes Gonzales recalls pro-government security forces roaming the streets at odd hours. He said this is when those forces would often kidnap, detain, torture and even kill those who opposed the government. Hundreds of activists were killed, while others disappeared. Reyes Gonzalez says he soon became a target and pro-government groups repeatedly threatened to kill him if continued to protest. In September 2018, three men on motorcycles ambushed Reyes Gonzales as he was walking home, and beat him severely. He received treatment at the closest hospital. Once he was released, Reyes Gonzalez fled Venezuela.

“I fled Venezuela amid political problems, amid death threats. I almost lost my life at the hands of groups affiliated with the government. They nearly killed me. And it is for those reasons that I had to flee,” said Reyes Gonzalez.

The Venezuelan father arrived at the Santa Fe Port of Entry in El Paso, Texas in December 2018 and was seeking asylum. He was eventually taken to the Otero County Processing Center in New Mexico where he spent nearly six months in detention.

He said he began to feel desperate and started losing hope.

“I was like a boat set adrift,” said Reyes Gonzalez, “I didn’t know what to do. Many doors were closing on me, and I could see that there would be no way for me to get out.”

Reyes Gonzales attended a “Know Your Rights” presentation offered inside the detention center by Diocesan Migrant and Refugee Services, DMRS. 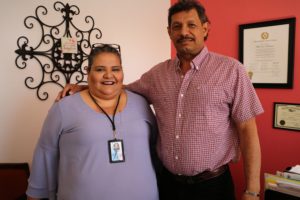 DMRS Attorney Marina Chavez agreed to take his case, and in 2019 Reyes Gonzales was granted asylum.

“I feel very happy and content, thankful to God above all else, for this blessing I have received. I don’t have the words to express my gratitude and everything that I am feeling, all of the happiness and gratitude for this organization (DMRS), and especially my attorney, Marina Chavez,” said Reyes Gonzalez.

The father of an 11-year-old boy is hoping to eventually bring his son to live with him in the United States.

“This is a country of opportunity, it is a great country, and here I hope to achieve what Venezuela took away from us: liberty, the right to work, and a peaceful life. I hope to give my son a good education in this country and make sure he turns out to be a good kid.”